Post Reply
[phpBB Debug] PHP Warning: in file [ROOT]/vendor/twig/twig/lib/Twig/Extension/Core.php on line 1107: count(): Parameter must be an array or an object that implements Countable

11 posts [phpBB Debug] PHP Warning: in file [ROOT]/vendor/twig/twig/lib/Twig/Extension/Core.php on line 1107: count(): Parameter must be an array or an object that implements Countable
• Page 1 of 1

Ok guys, while I'm designing shit for the campaign, I would like some feedback from you on what you like in campaigns or what is most important to you. Questions to focus on so you don't just say "I dunno... whatever?":

2) What type of character do you tend to play/enjoy playing? What kind of role do you like to play in a party? Do you have any desire to have an important role to play in terms of the game world as a whole, or in the plot?

3) Are there any game mechanics or creatures/races that you enjoy that you feel are often neglected?

4) What kinds of encounters/campaigns do you hate with the fire of a thousand suns?

Any additional comments would be nice, I'm just trying to get an idea of what you guys like so that I don't bore the shit out of you. If you have ideas that you would like for an individual character/backstory that you do not want posted publicly, PM me.
Kazz> Do vampires have anuses? Cause that's why I wouldn't let this kid invade a vampire's anus in this RPG, right, I was GMing, and his character was an Anus Shade, with the power to possess and control the anuses of people and animals.. and I figured that vampires don't have anuses.
<Zaratustra> a vampire's anus is present, but non-working.
<Zaratustra> like a network card without the appropriate driver.
<Kazz> Wow. You're the biggest dork on Earth.
<Sharkey> And you're DMing an rpg with Anus Shades.
Top

1. At the moment, I wouldn't mind a little bit of everything. I get my daily dosage of political intrigue and tactical battles from Dai's game, and Marty's game covers Eberron-esque adventuring. However, the amount of roleplaying in a game is, at least to me, important. DnD is, after all, an "RPG".

2. My speciality with regards to characters is in the "Holy Knight sub-archetype" (paladins and clerics of deities of good and order, usually with a few fighter levels thrown in for martial flavor). I don't mind playing clerics or wizards (and sorcerers, if we're doing this in 3.5), and expert characters are pretty fun too, but, OH GODS, how I despise pure martial characters (not counting martial initiators (TOB)

). So, I guess I'm willing to play pretty much any role within the typical adventuring party.

In terms of the over-arching plot, I would certainly hope that the adventures of the party would have some impact on the world, some effects obvious, most not. Rest assured, however, that my character will have some long-term motivation pushing him along, and if the DM is willing to work with me on that, all the better.

3. Kobolds for their draconic flavor, and Hobgoblins for their martial badassness potential.

4. Campaigns that start low, and take a long, long time to get anywhere. I don't mind starting at a low character level, but I can't stand DMs that have a predetermined set of "gold levels" and try to keep the PCs there for as long as possible. I like to level up, and level often.
You! Your character's build displeases me! Come to the boards for nerfing!

1. I like playing in campaigns with strong RP elements, but still a lot of combat, and prefer epic campaigns, so long as they have side adventures to relieve the 'tension' of the main story arc. I want the best of both worlds, I guess

2. I tend to like caster and stealth classes and enjoy a control/burst type of gameplay. Social interaction is also fun :O. I do like shaping events!

3. STEALTH/SKILL USE. Omg, never get to use my skills

Sometimes I just wanna steal some shit or something.

I'll PM you my current character design and backstory.
Top

1) I enjoy campaigns that are a good mix of both. I don't mind the occasional kick in the door adventure where its all about the phat lootz, but I do start to get annoyed when the whole campaign is about RPing.

2) I tend to play whatever character I feel like, unlike other players I don't have a niche that I have worked myself into. There are occasions where I just play whatever the party needs. My preferred roles in the party are either blasting or tanking, I will play a healplx but I don't do it often as I tend to get sick of doing nothing but healing. I don't mind having an important role to play in terms of game world or plot, provided I didn't do something stupid like make a character that I couldn't RP.

3) The game mechanic that I feel is most neglected sadly is not in 4e yet (psionics). I do agree with Wes that stealth and other skills like are are neglected as well (like Forgery and Sleight of Hand in 3.X). As for races, I feel that races that are not in PHB are neglected, specifically races that are usually evil NPCs (Bugbears, Gnoll, Drow, Kobolds, just to name a few). And of course I feel that Doppelgangers are neglected and often ignored despite the fun that could be had.

4) Campaigns that never level. Or campaigns that have lots of XP loss (don't think we have to worry about that with 4e). And I'm getting pretty tired of fighting undead and orcs too.
[PCs Currently At - Sailing The High Seas]
TODAY: Arodus 28, 4711
PARTY BUFFS ACTIVE: None


"No matter how difficult or absurd you make a puzzle, your players will find an even more impossible and preposterous way of solving it." - http://www.shamusyoung.com/twentysidedtale/?p=680
Titles: He Whose Hand Shapes What Is, Epic Destroyer of Loot, Creator of the Elemental Plane of Bishoujos.
Top

Personally, I think it might be interesting to play a group of PCs that are from races/cultures that greatly differ from those of the norm (a group of bestial humanoids amidst humanoid kingdoms). Its one thing to walk into a town and sell loot from an adventure, its entirely different matter for a groups of orcs/kobolds/gnolls/goblinoids/half-kin to walk into a town and try to sell loot after their have been reports that caravans are being raided in the area.
You! Your character's build displeases me! Come to the boards for nerfing!

1:I like my campaigns to be from the two extremes. A moderate RP session to determine what Kick-in-the-door mission we're going on. Dai gives me my fill of tactical combat, I just want "there's a horde of monsters. Kill them as you please... if you can." Because this is a new system, i vote for a level no higher than 12, preferably starting around level 6, and leveling often to give us a feel for the game, and then we'll hit Paragon status around the start of school.

2:I'm very based on what current build i find interesting. Right now, I WILL be playing a 2 weapon fighting ranger, come hell or high water. Some unique skills, and a certain amount of attitude, coupled with bad-ass dual wielding moves. If you wanna make me integral to the plot, just let me know and I'll work it into the backstory. I don't mind playing leader, though I doubt that it will work well with my class selection (charisma is usually a dump stat.)

3: I haven't seen any mechanics so far. All the skills seem to be neatly wrapped up. I forget if Rangers still get tracking, but if they do, I miss how it's always a main plot quest, and everyone's able to easily follow the trail. Being a man of the Beastiary, I'm normally inclined to play strange races. Oddly enough, when reading through the PHB, I fell in love with Eladrin, and will probably be playing one of those. 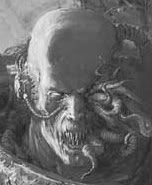 1. I like campaigns with a good mix of combat and roleplay. I like to have combat that is more strategic, and very challenging. I also prefer campaigns that are more player-driven, where different choices lead to significantly different events and adventures.

3. Not sure, since 4E is so new, although Drew's idea of monstrous PCs sounds promising.

4. Railroading, and combats that are either too easy or too static and boring.
Would it not be easier
In that case for the government
To dissolve the people
And elect another?
-Bertolt Brecht
Top

1) I've never really played in anything normal for all that long, so I guess I'd like something in between. Being a new system, I'd say start lower rather than higher so we can all get used to the rules.

2) Some sort of tank, generally, though I'm quite enjoying playing a skillmonkey right now in Dai's game. Basically, anything but arcane. RPwise, I'll do whatever comes to mind as I build the character. In terms of affecting the world, well, let's put it this way: basically, whatever works for the DM in terms of integrating my character.

3) Grappling. Oh wait, that's neglected for a very good reason. I like unarmed combat as well, but that's not really doable in 4e yet. Other than that...not really, I guess.

4) Can we steer clear of national militaries this time around? It seems like every game I play, the party (or at least my character!) ends up getting drafted...Also, deep political intrigues bore me. +1 on railroading, unless it's done subtly. If we can tell it was done at all, it wasn't done well at all.

Judson, this almost undoubtedly isn't going to be crazy strategic/hard combat, I'm just gonna point that out. If I had to guess, I'd say this would be 70/30 RP/combat, just based on Brooke's style as a player.

Kazz> Do vampires have anuses? Cause that's why I wouldn't let this kid invade a vampire's anus in this RPG, right, I was GMing, and his character was an Anus Shade, with the power to possess and control the anuses of people and animals.. and I figured that vampires don't have anuses.
<Zaratustra> a vampire's anus is present, but non-working.
<Zaratustra> like a network card without the appropriate driver.
<Kazz> Wow. You're the biggest dork on Earth.
<Sharkey> And you're DMing an rpg with Anus Shades.
Top

I'd like to add a preference for games that level at a solid rate.

I'm agreeing with Dave on that point. Games that level at a slow rate are boring.
[PCs Currently At - Sailing The High Seas]
TODAY: Arodus 28, 4711
PARTY BUFFS ACTIVE: None

11 posts [phpBB Debug] PHP Warning: in file [ROOT]/vendor/twig/twig/lib/Twig/Extension/Core.php on line 1107: count(): Parameter must be an array or an object that implements Countable
• Page 1 of 1