Personally, I'd be down for a game starting around 3rd-5th to break up the monotony of 1st level starts we've had with PF Adventure Paths: They're great adventures, but starting at level 1 is not. Also, as swell as Sharn is, I've played in at least 5 games based in the City of Towers, and would prefer to try something slightly different. What about a band of explorer's for hire operating out of Xen'drik? I feel like I never got to explore that continent much. For me, the ideal game would start with the PCs working for contracts, but slowly reveal some sinister over-plot every few missions.

Sorry for the ramble, that's all I had off the top of my head.
You! Your character's build displeases me! Come to the boards for nerfing!

Stormreach has its own book (its the major city on Xen'Drik), so that's got some details for use as a base of operations.

I also vote for a start in the 3-5 range, though expand it out to 3rd to 6th (to allow for starting out with a PRC, if desired).
[PCs Currently At - Sailing The High Seas]
TODAY: Arodus 28, 4711
PARTY BUFFS ACTIVE: None


"No matter how difficult or absurd you make a puzzle, your players will find an even more impossible and preposterous way of solving it." - http://www.shamusyoung.com/twentysidedtale/?p=680
Titles: He Whose Hand Shapes What Is, Epic Destroyer of Loot, Creator of the Elemental Plane of Bishoujos.
Top

No on the Lv6. If you're going for a PRC I expect for you to begin working towards it, not have it already and simply claim it's "something in your character's past".

There will be no Artificer class because PF rules made it obsolete (no XP to craft; Master Craftsman feat). Any PRC that advances Infusions may advance Alchemist / Investigator infusions instead.
| 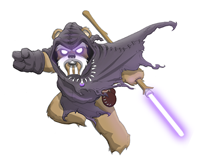 Starting 3-5 sounds good to me, as does Stormreach. I'm leaning toward either a warpriest or a rogue (or investigator, if the alchemy doesn't seem like too much of a drag). Warpriest would be a bit more stereotypical, while the rogue/investigator would tend to a more pulp/noir approach.
Top

I'm tentatively interested, predicated on finding something I want to play. Stormreach sounds fine, and starting in the 3-5 range works, though I have a slight preference for 4 or 5.

4th level sounds good. It'll give us 2 levels before we can even really consider PRC's which should be enough time to RP our way in if we want to PRC. My argument for starting at 3rd would be that it gives Dai some time to decide if he wants to do some faster Ability score growth (+2/4 levels, etc.)
(|)
(|)

Note, the events of this campaign will take place two years after Heroes for Hire (the Sharn campaign) ended in 998YK, which makes this exactly 1000YK.
We'll start in late winter, before the jungles get too hot ^^

Handy tool for later use: https://www.wizards.com/dnd/ec/index.htm

My old character Aine will be the principal investor and biggest non-PC shareholder of the company. She is in Stormreach to establish another store for Atelier -- now a store chain. Her companion Reverie will be as well, which leave Evrain back in Sharn to mind the main shop. I need to rebuild both characters, so they'll be posted later.

This means the company with begin with some links to:
the Brelish -- as Aine as strong connections (her father is a Brelish noble and ex-Citadel)
The Gatekeepers -- Reverie is a high ranking member who takes on independent missions
House Tharashk -- it's local leader is a Gatekeeper devotee
|

As I reach through Stormreach's book, some realizations...

"Stormreach—you will fi nd no greater den of villainy on the face of Eberron. The city’s pseudonyms, from the Pirate’s Haven to the Nest of Vipers, are too many to list"
-- You'll want to figure out some way of keeping money safe as you wander the streets. This place makes cities like Detroit, Gotham, and Mos Eisley look like model towns.

-- You'll want some means for dealing with aquatic foes and on-water/shipboard combat if not underwater. This is a port city after all. The weather will be rainy; more a Bangladeshi monsoon than British showers, and many a newcomer have been washed away by the fast flowing waters of the streets' 'scupper' lanes.

-- For those interested, start figuring out what facilities you need in for the company. Remember that at the start, everyone will be staying at the company building (until they find their own places). This is not exactly a city good for camping about, and the forests outside the walls are full of dangerous, murderous drow who want Stormreach's inhabitants gone from their continent.

-- Lastly for those who will be reading the City of Stormreach book themselves soon -- keep in mind: which district do you want company HQ situated in?


Edit:
By player demand, added the following rule variant to list of those being used:

; this gives +2 skill points per level which can only be spent on: Appraise, Craft, Handle Animal, Knowledge (Art, Economy, Engineering, Geography, History, Nobility), Perform (only if you're not a Bard, Skald, or similar performance class), Profession, and Sleight of Hand. Linguistics is GM-ruled to not count as a background skill. Knowledge[Art] and Knowledge[Economy] has been added as two new skills. The Pathfinder-proposed Artisan and Lore skills will not be in use.
|

I intend to start by the weekend of July 12th

Please have you character done by that Friday (July 10th)

Marty gets an extension to the following week as he's waiting on Occult Adventures book to come out, but I want enough backstory bluff to work on before then (can fill out the details later).
|

After Dai mentioned planning this game a few times, one thing came to another and as such things happen to go, I've decided to give it a try. As much as I enjoy character-building, I cannot be called experienced at RPing by most means so I'll be happy about any advice and criticism you'd be willing to give.

(Is there anything else I should/would/could say here?)
Stormreach Company: ( / )
Top

Don't worry. We're a pretty non-critical group here. As long as the effort's being put in, you're good by us.
You! Your character's build displeases me! Come to the boards for nerfing!